The Multiplier Events “TASK in progress” aim to valorise the O1 TASK Framework.  The events are realized in the partner countries, and involve the main project target: school teachers of lower and upper secondary school, head teachers, The events have 2 peculiar objectives: to spread and valorise the 1st intellectual output, the TASK Framework; to reach the target of teachers to make them participate in the experimentation of the Framework, that start in the same period.

Task in Progress in each country

The 1st Multiplier Event has been organized and realized in Brindisi by the school Majorana. The seminar “TASK in progress” on the certification of key competencies in the school was attended by about 100 teachers and managers in the province of Brindisi, also from schools that belong to the local network “Certificare le competenze per una buona scuola” (headmasters of the Primo Circolo Didattico Collodi – Fasano (BR), applicant of the project Gennaro Boggia).

The event was open by the Majorana’s headmaster Salvatore Giuliano, with an introduction about the development of the Key Competences in school. The event continued with the contributions from the other speakers: Gennaro Boggia about the competence based curriculum; Luciano Schiavone and Giovanna Zito (IISS Majorana) presenting the project; Eleonora Guglielman and Laura Vettraino (Learning Community) presenting the TASK framework; Maria Rita Metrangolo and Marilena Comunale (IC Bozzano) presenting the work about the assessment of the competences developed  by the IC Bozzano within the experimentation of the model of certification of Key Competences of the Ministry of Education.

The second Multiplier event of the project TASK was held in Rome the 6 of May hosted by the “Istituto Statale per Sordi”; involving about 30 participants, teachers and head teachers of the secondary schools in the province of Rome.

Ivano Spano, representative of the Istituto Statale per Sordi welcomed the event. The autoritative panel of speakers offered a rich view of the possible implications of the TASK project for the daily life in the Schools.

Mario Rusconi underlined the importance of projects like TASK allowing to carry out educational research on themes so relevant for the school.

Licia Cianfriglia, National Vice President of the national Association of head teachers contextualised the project TASK in the institutional frame and requirements for the competence assessment and certification in the school recalling the legislative iter .

Marco Guspini, Referent of Regional Educational Office of Emilia Romagna, deepened the methodological aspects of evaluation and self evaluation in the school.

Ismene Tramontano, Europass National referent, recalled the link between TASK, and the recent low Ordinanza n. 252 of 2016 on High school diploma requirements for  2015-16 including for the first time the Europass Certificate Supplement.

During the seminar a practical demo of the assessment procedure was offered to participants  willing to take part in the following experimentation phase.

View the presentations (IT version) shown during the seminar

The first Multiplier Event took place on 10 May 2016 in the European Schoolnet office. Six Belgian teachers attended the workshop. Caroline Kearney, project manager of the KeyCoNet project (2012-2014), gave an overview on the topic “Key Competences”. Then participants got introduced to the TASK project and the outline for the TASK self-assessment tool. They discussed the outline in groups and gave detailed feedback. Moreover, workshop participants also got to know the Future Classroom Lab and other European Schoolnet projects such as the European Schoolnet Academy, eTwinning and the Web We Want. 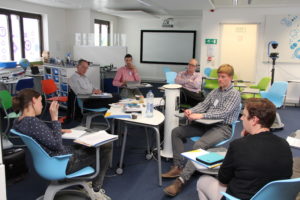 On 08 April 2016, a presentation of the Task project to all of the local secondary schools was held  in the College Drouyn in Verac. The discussion focused on the project aims and firs outputs, the curriculum based school, the authentic task in the assessment of key competences and the TASK framework. 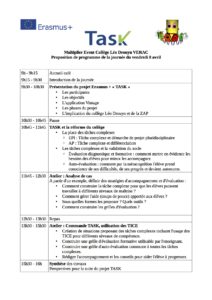 The first multiplier event was carried out in Porriño on May 10th 2016. A total of 35 participants attended. Between the attendants were school teachers of lower and upper secondary schools, head teachers and some local policy makers (education city councillors and mayors) from Porriño and surrounding city halls.   The main aims were to valorise the first output of the project: Task Framework and encourage the teachers to make them participate in the experimentation of the Framework. 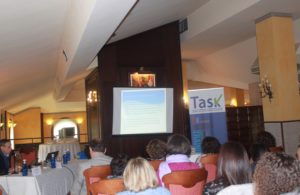 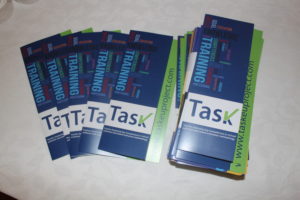