The multiplier events “TASK Development”  aim to valorise the O2 piloting results and the O3 web application. The events are realized in the partner countries, and involve a larger audience of participants: school teachers of lower and upper secondary school and head teachers; target already involved in the 1st set of events; teachers, trainers, managers from other educational levels and contexts, experts, key actors and stakeholders.

Task Development in each country

Last 24 November 2016 was held in Viterbo, in the Aula Magna of the University of Tuscia, the second transnational multiplier event of TASK project entitled “TASK Development: assess and certify key competences in school.”
The event was organized by Learning Community with the support of ANP (National Association executives and high professionalism of the school), and was attended by 126 teachers from over 30 schools in the province of Viterbo.
The researchers Eleonora Guglielman and Laura Vettraino presented the beta version of the online procedure for the assessment of Key Competences in school at ISCED2 and 3 levels; after the presentation the teachers, gathered in working groups, have realized a SWOT analysis identifying strengths and weaknesses of the procedure in view of its applicability in the school.
The seminar is part of the dissemination activities of the Erasmus+ project TASK – Teacher Assessing Key Competences in School: authentic task based evaluation methodology – 2015-1-IT02-KA201-015399.

On  2nd  December 2016 was held in Gümüşhane, in the seminar hall of National Directotate of Education, the first multiplier event of TASK project entitled “TASK Development: assess and certify key competences in school.” The event was organized by Merkez Atatürk Ortaokulu and was attended by 73 people,from 25 institutes; participants include teachers, provincial administrators, superintends and school managers in the province of Gümüşhane. The researchers Serdal Şeker and Oğuzhan Olgun presented the beta version of the online procedure for the assessment of Key Competences in school at ISCED2 and 3 levels; after giving some information about every stage of the project and activities carried out. 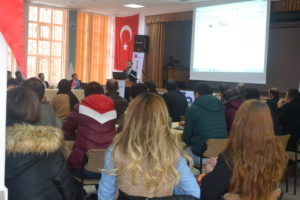 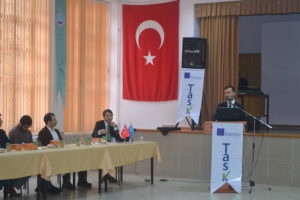 The second TASK Multiplier Event took place on 24 January 2017 in the European Schoolnet office. Four Belgian Teachers and one representative from the Ministry of Education of Belgium Wallonia joined the event. During the first part, participants got an introduction to the project’s key area: key competences and their assessment. Participants also learned more about the TASK project and the newly developed TASK self-assessment tool. They tested the new tool during the workshop and gave feedback. During the second part of the Event, participants got a guided tour of European Schoolnet’s Future Classroom Lab. The new TASK online self-assessment tool was also presented during the meeting of the NESTT project at the EUN office on 28 February. The audience were mainly teachers, but also representatives from teacher training organizations in Portugal, Poland and Romania. 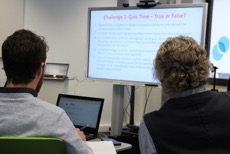 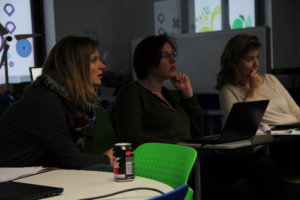 On Tuesday December 13th, a presentation of the Task project to all of the local secondary schools was held. Representatives from fourteen schools attended the meeting. Thus, inspectors from the French ministry of Education for primary and secondary schools, as well lower and higher secondary school headteachers, and the manager of an education counseling centre were able to discover and learn about the beta test version of our TASK tool for the self assessment of key competences. A rich discussion about the ways such a tool could be used and particularly about the the reflexive dimension of the assessment was engaged. The assembly acknowledged that in addition to the tests that were to be performed with students, it was necessary to give teachers more information on the subject. That is the reason why the decision was taken to organise an educational event on the theme of competence assessment in Europe in May 2017. This event will host the conference of a university lecturer, which will be followed by a series of educational practice workshops dedicated to competences and European projects. 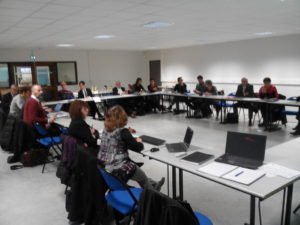 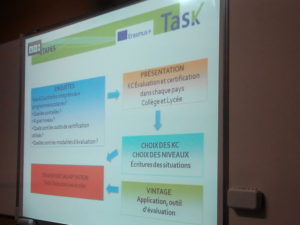 The second multiplier event was carried out in Porriño on April 27th 2017. A total of 23 participants attended, 3 of them from a Portuguese school, placed in Arcos de Valdevez. Between the attendants were school teachers of lower and upper secondary schools and some experts and key actors and stakeholder in the educational level. The main aims were to valorise the piloting results (carried out under output 2) and the web application developed under the output 3 to be experimented by learners between 14-19 years old. 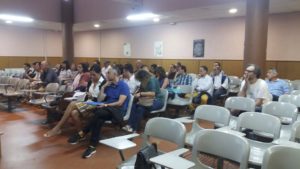 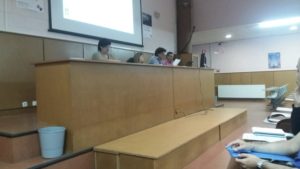